Truth About Tampons? Think Twice About Using Tampons. Here’s Why

Tampons are awesome – they let you hang out on the beach wearing a tiny white swimsuit, happily playing volleyball with your friends. At least, that’s what the ads would like you to think. 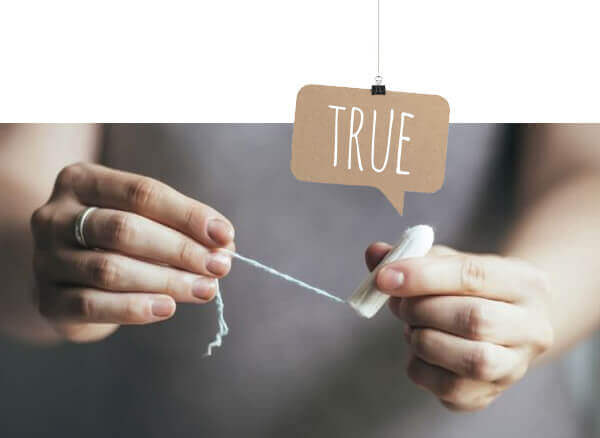 In reality, tampons come with a very real risk of Toxic Shock syndrome (TSS). They also contain potentially harmful chemicals that every woman should know about.

Menstrual cycles aren’t new of course, and neither are tampons. Ancient Egyptians used papyrus to make them; Greeks used pieces of wood. Other ancient cultures also used wood, paper, vegetable fiber, sponges, grass and eventually cotton. The modern tampon with applicator came about in the 1930s, and then after undergoing testing and development in the 1970’s, was nationally marketed in the United States in 1979. Despite its success, almost immediately, the health risks became apparent. When women started showing up in hospitals in 1980 with cases of TSS, the link was made between tampon use and this dangerous syndrome. Manufacturers started to distribute warnings and to recommend that tampons are changed every four to eight hours – and never left in longer than eight.

TSS is caused by an overgrowth of bacteria that occurs naturally in the body. If you wear a tampon for too long, it can provide the perfect breeding ground for this bacteria. Thanks to the absorbent tampon, bacteria can multiply to dangerous levels and enter the bloodstream, creating the potentially fatal condition known as TSS.

Symptoms of TSS Include:

These symptoms require prompt medical attention. If you experience a sudden fever or rash while wearing a tampon, remove it immediately and get to a doctor or hospital emergency room as soon as possible. TSS causes a sudden drop in blood pressure that can lead to death. The infection can result in shock and the failure of major organs.

The skin inside of the vagina is very absorbent and permeable, yet manufacturers aren’t required to reveal what the tampons they’re selling us actually contain. Tampons also aren’t independently tested. Most of the tampons that we find in stores today are made from non-organic cotton and rayon. The cotton in non-organic cotton most likely contains residue from pesticides and fungicides used on the cotton crop as its growing. While there hasn’t been research done into the effects of pesticide residue on tampon users, it’s common sense that we probably don’t want these harsh chemicals inside our bodies.

Tampons also may contain man-made ingredients like plastics. According to physician and author Dr. Joseph Mercola, chemicals in plastics, like BPA and BPS, have been connected to the development of heart disease and cancer. Synthetic materials also interfere with airflow, possibly contributing to the growth of yeast and bacteria in the vaginal area.

On top of all that, the cotton or rayon is bleached to achieve its pure white color.  Bleaching creates toxic compounds called dioxins. Dioxins have been recognized by the World Health Organization (WHO) as causing cancer in humans. Dioxins have also been linked to hormonal imbalances, infertility and immunity problems. According to a researcher for the Women’s Environmental Network, dioxins build up in our bodies over the years. So even though there may only be tiny amounts present in tampons, they collect in our fatty tissues and can build up to dangerous levels. You can avoid dioxins by using organic tampons that are bleached with hydrogen. Using menstrual cups will also keep you away from potentially dangerous dioxin exposure.

The manufacturers of feminine hygiene products say that their products are safe and that dioxins are everywhere in the environment, including water, air, food, and clothing. They state that today’s bleaching methods are designed to be dioxin-free processes; however, there may be trace elements of dioxin in tampons anyway since dioxin is just about everywhere due to decades of pollution.

There was a rumor going around that tampons contained trace amounts of asbestos, and that tampon manufacturers put it there for a very shady reason: to make users bleed more and need to buy more tampons. However, this isn’t true, and the FDA has responded directly by saying that they have zero evidence of asbestos in tampons and no reports showing increased menstrual bleeding with tampon use.

Most of us grew up thinking that disposable pads and tampons were our only options. Thankfully, there are safer choices out there. You can get started with menstrual cups here.