Home > Menstrual Cups 101 > The Looncup: Wearable Tech for Your Vagina

The Looncup: Wearable Tech for Your Vagina 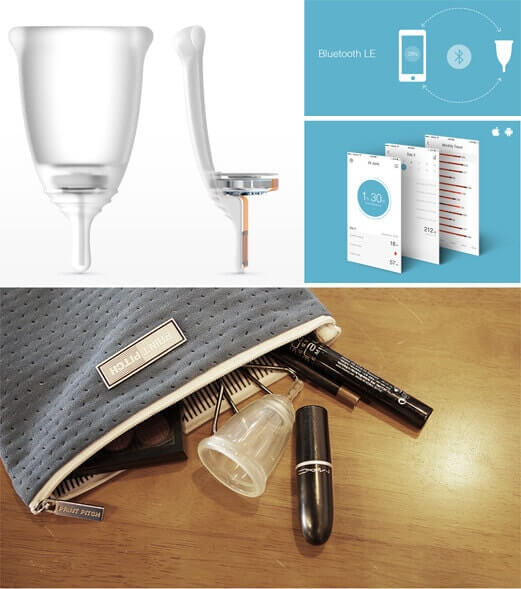 This new invention bridges the gap between menstrual cups and the latest technology.

If I’m not wearing my Fitbit activity tracker, I feel like any steps I take during the day are a waste of my time. I also use an app on my smartphone to keep track of my menstrual cycle, so I can know when to expect it, down to the day. Fans of wearable tech and tracking your stats, like me, are psyched about the Looncup: the first smart menstrual cup.

The trusty menstrual cup has remained pretty much the same for the past 100 years, but a company called Loon Labs is giving it a tech-savvy makeover that’s sure to intrigue die-hard fans of menstrual cups and data geeks alike. And if you’re both of those things, like me, you’ll be getting your Looncup on order ASAP.

While the name makes it sound like you’d have to be “loony’ to wear it, never before has a woman been able to keep such a close watch on her period. Our periods, aside from being annoying to most of us, are also helpful monthly indicators of our reproductive system’s health. 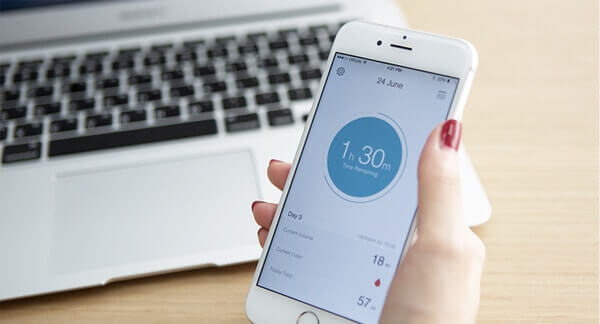 The Looncup is inserted just like any other menstrual cup. However, it has a sensor inside of it that communicates via antenna with your smartphone. It uses Bluetooth, just like Fitbit or Jawbone or almost any other activity-tracking wearable tech.

If you already use menstrual cups, inserting the Looncup will be easy for you since it’s just like any other cup.

If you’re new to menstrual cups, it can take a little bit of practice. Here’s a how-to video from Loon Labs: 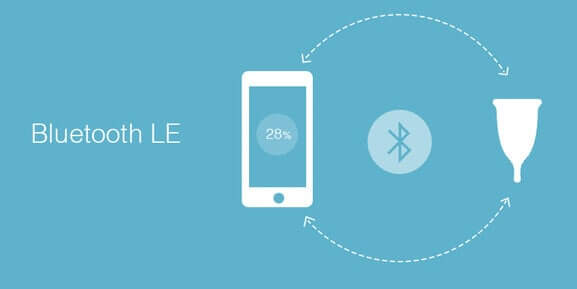 First of all, you never have to worry about overflow when you’re wearing this cup. The Looncup, referred to by its makers as “your monthly period partner,” will send updates to your phone telling you when your cup is at 50 percent and 75 percent capacity.

Maybe I’m just twisted, but I think it’d be a lot of fun if the cup also beeped or gave a spoken warning when it was time to refresh. Can you imagine your boyfriend or co-worker asking, “Do you hear something? What’s that beep? Who’s talking?”  Rest assured, the Looncup is silent. However, it shouldn’t be worn when going through airport security; its makers caution that this cup will most likely set off X-ray machines. Now that would be awkward.

There are already a lot of apps out there for tracking your menstrual cycle, but you won’t need them if you get the Looncup since it keeps track of your cycle, too. Simplify, simplify! 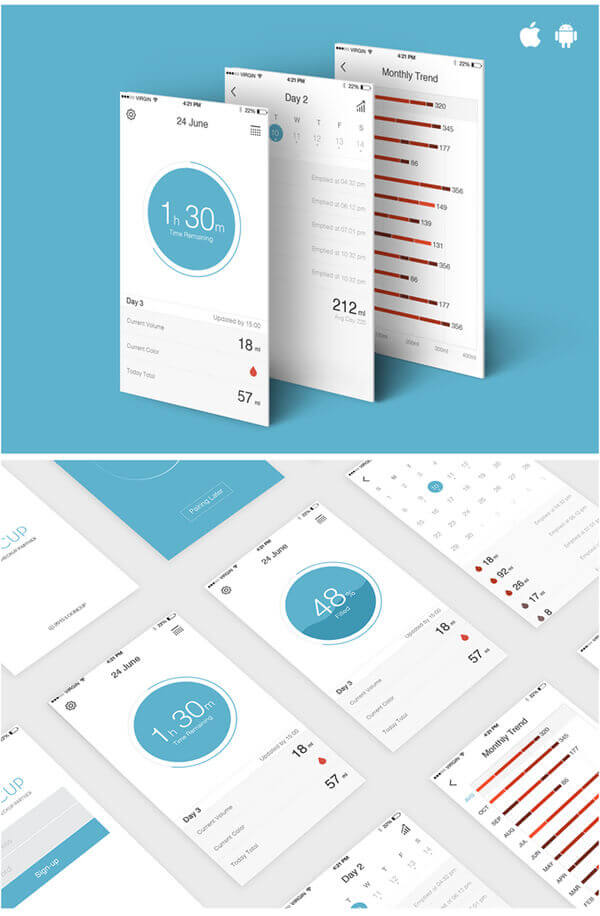 The app will be available for both iOS and Android users in January 2016. The primary features will be:

Just like any wearable tech, the Looncup is safe to wear. All the parts are embedded in medical-grade silicone, and Loon Labs says, “You never have to worry about it becoming exposed.” The blue-tooth signal is also so small that it barely registers.

Why is it called the Looncup? Doesn’t loony mean crazy?

I was curious about the origin of the Looncup name, so I contacted Loon Labs to ask them if there was any special meaning behind it. Their response was that they came up with the name Looncup as a play on the words “luna” which means moon and on the word “moon” itself, which is suggestive of the menstrual cycle.

Notifying you when it’s time to refresh your cup is just one thing this menstrual gadget can do. It also keeps track of your menstrual fluid’s color, which can tell you a lot about your health, believe it or not. Yes, most of us think of the only color during that time as red, but the shades of menstrual fluid can vary from a pinkish color to dark brown and even gray. According to WebMD, the color of a woman’s period can reveal signs of dehydration, miscarriage and hormone fluctuation. For more on what the color of your menstrual blood says about your health, check this out:

Quantify Your Flow to Be Aware of Changes

The Looncup keeps track of the volume of your flow, showing you both your current amount of flow and the cumulative flow over your entire cycle. This is a fantastic way to compare your cycle period-by-period so you can be aware of any changes. 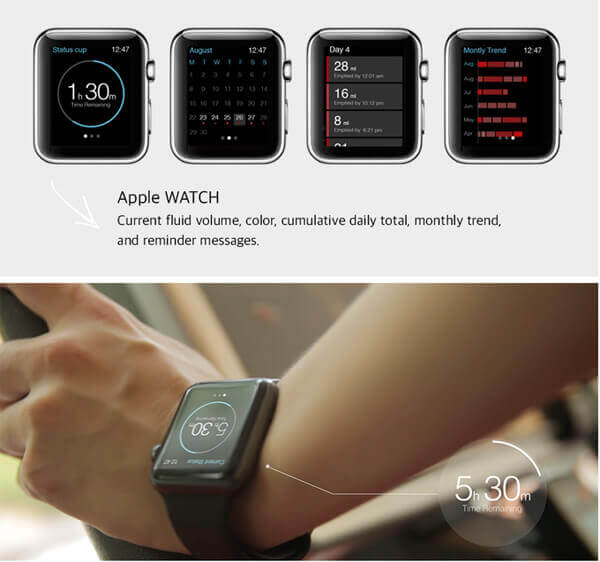 Currently, the only way to keep track of flow volume is to maintain a count of how many pads and tampons you use or how frequently you need to change out your cup. And who has time to take out a notebook and put down a check mark every time they change pads? Have you ever thought your period seemed heavier than usual but weren’t sure if maybe you just imagined it? With the Looncup, you can know exactly how light or heavy your period actually was. This can help make you aware of issues that might need medical attention. 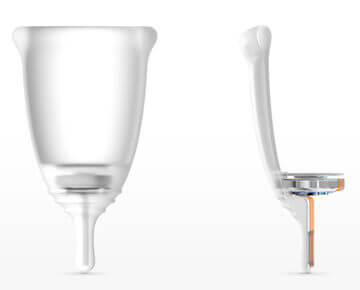 At this time, unlike other menstrual cups, you can’t trim the stem on a Looncup. That’s because the antenna that communicates with your smartphone is in the stem. Some women find the stems on menstrual cups to be uncomfortable. Loon Labs is aware of this and says their stem is shorter than the stems on most other cups, and they are diligently working on coming up with solutions to the antenna/stem issue. Loonlabs staff boasts Ph.D.s in biomedical engineering, so we can rest assured that there are brainiacs at work on perfecting this product. The Looncup is currently only in its initial launch phase, so as of now they only have one cup size and only one color.

OK, this is the only thing that gives me pause about the Looncup. Not only can you not trim the stem because the antenna is in it, but the end of the antenna has to be just outside of your body for it to be able to communicate with your phone. 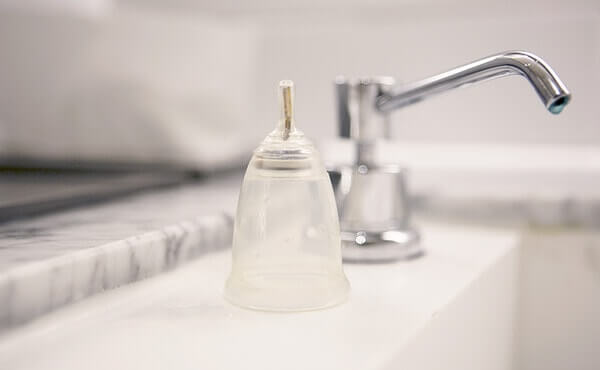 Looking closely at the pictures, the placement of the stem does seem to be strategically placed and more contoured than other menstrual cup stems I’ve seen, so maybe it won’t be a problem after all. Time will tell.

Since the battery is sealed inside of the medical grade silicone so that it won’t come out, that means that, well, the battery doesn’t come out. Ever. So when the battery dies, which could be after six months of use, you’ll need to get a new Looncup. The company is aware this is a bummer and are working on coming up with ways to extend the battery life. 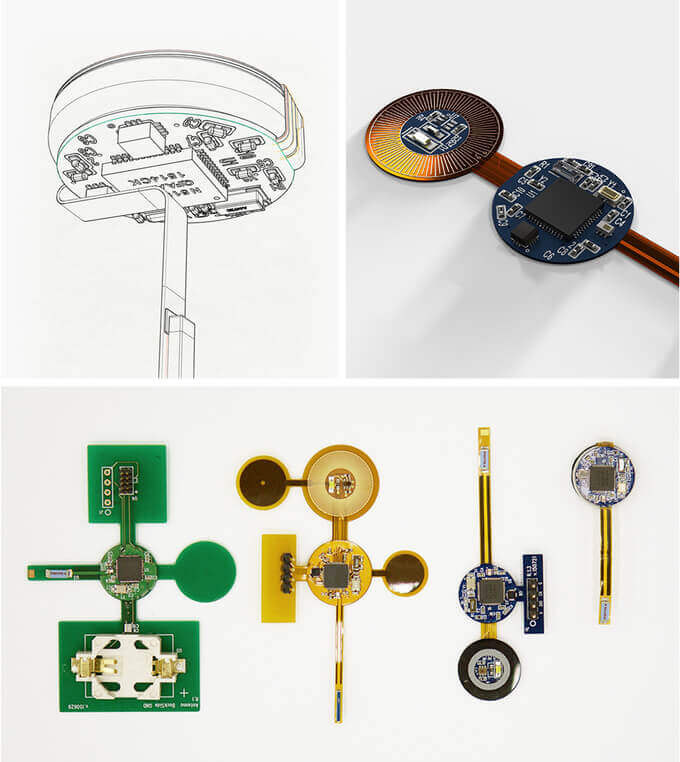 Because of the tech in this menstrual cup, you can’t boil it or use the microwave to sterilize it. You can only clean it with soap and warm water. That usually is enough to get any menstrual cup clean and wearable, but if you’re a fan of boiling your reusable cups, this one may not be for you.

Price and Where to Buy the Looncup 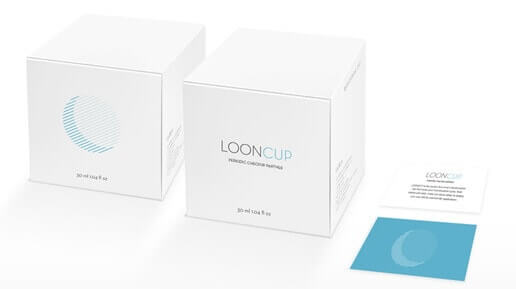 If you pledge money to help fund this product’s development and production, you’ll be on the list to receive one Looncup (or more, depending on which pledge package you choose) when it comes to market in January 2016. That is just a projected date though; there can be unexpected hiccups along the way when you bring any new product to market.

The price for one Looncup currently ranges from $30 – $40 USD with free shipping included. Loon Labs describes this as a “sweetheart deal” for early supporters of the product, so it sounds like once the Looncup is officially on the market, the price may go up, but that’s just my guess.

This product is still just a baby, but I think it’s getting a lot of buzz for a good reason—and not just because it lends itself to catchy headlines like, “This new period gadget will text you from inside your vagina.” The Looncup has all the benefits of a traditional menstrual cup with the bonus of collecting and communicating useful information. 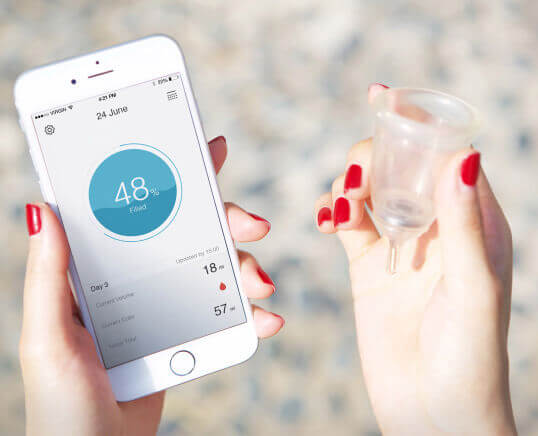 The more we know about our bodies and the better we can understand our cycles, the more confident we can be when discussing any problems with our doctors. Knowledge is power, as the saying goes, and the Looncup can give us the power to better understand our periods and our health.