Although the name is a bit confusing, the Ziggy Cup is actually disc-shaped and is brought to us by Intimina, the makers of the Lily Cup Original, Lily Cup Compact, and Lily Cup One.  They are also known around the world for their Kegel tools and pleasure items.

The Ziggy Cup is manufactured in China and made of soft silicone.  It is the first reusable menstrual disc to be offered.  Its ergonomic shape and double rim feature help the user have a better fit and ensure that it does not leak.

The Ziggy Cup may be found in some physical stores as well as various online selling platforms.  This two-year reusable disc costs an average of $40.00 but has been spotted for less. 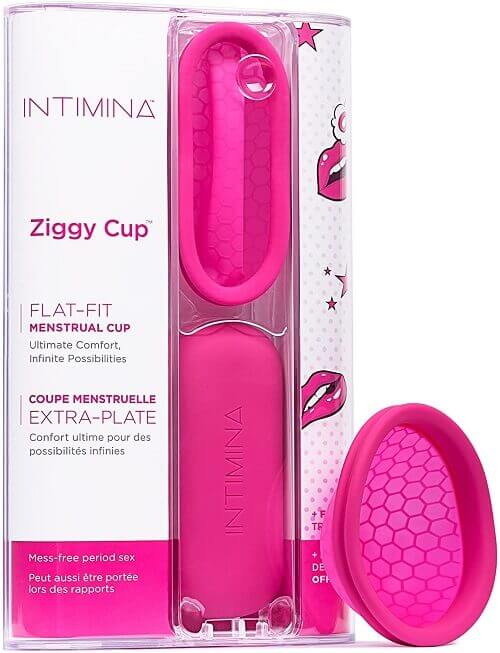 The Ziggy Cup arrives in a large, hard plastic, clamshell case, along with a small silicone carrying/storage case, and a user manual.

Who is it Meant For?

The Ziggy Cup is only available in one size.  According to the company, since a menstrual disc sits differently than a menstrual cup, it should fit everyone.  However, many users have reported that that simply is not true.

Unlike menstrual cups, the disc is pinched at the center and then inserted beyond the cervix into the vaginal fornix nearest to the rectum and tucked above the pubic bone.  The soft reservoir collects menstrual fluid for up to 12 hours. 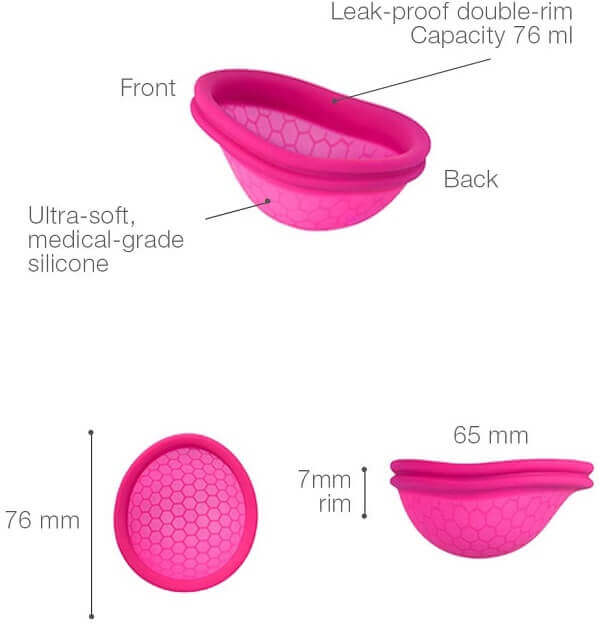 Type of material –  The Ziggy Cup is made of soft, velvety silicone.  While I’m no expert in these types of materials, it seems to be made of High Consistency Rubber (HCR).  This material can also be medical-grade but may be different than what you’re used to seeing or feeling with a majority of standard menstrual cups.

Rim – The rim of the Ziggy Cup is oval-shaped as opposed to the circle we see in most menstrual discs.  The only other menstrual disc with a similar shape is the “Lovin Disc” which is only sold in Brasil.  This ergonomic shape is supposed to give the user a better fit.  The rim is also doubled which is claimed to be leak-proof.

To use this ergonomically shaped disc as intended, it needs to be inserted in a specific way.  The side with the deeper reservoir is meant to be inserted first.
I’m not in the habit of making sure my disc, or cup for that matter, is facing a specific way before I insert it.  Although it may be quick and easy to check, it’s just one more thing I need to worry about getting right, or wrong, when dealing with my period.

As for the double rim, while it may have helped against leaks, it also created a dragging feeling during removal.  It was quite uncomfortable and made me wonder if some water-based lubricant would help.

The rim diameter is 75 mm long by 65 mm at the sides.   Although it may seem wide, discs are folded and positioned differently than a standard menstrual cup.

Reservoir – The reservoir is a thin film that collects the menstrual flow.  While it holds a high capacity fully expanded, users have found that this is not always the case.  When the disc is inside of the body, the film is so lightweight that it may stay wrinkled.

The reservoir is as soft as a rose petal and should not be felt by you or your partner while using this cup during penetrative intercourse.

Firmness of rim – The rim of the Ziggy Cup is medium firmness, but the wide diameter makes it feel softer than it is when trying to get this cup inserted and opened.

Personally, the rim is too soft for my liking.  Although it was easy to fold, the end that was not inserted first would fold to the side making it difficult to insert the rest of the cup.  When I released the disc to reposition my grip so that it was not folded, the rest of the cup would slide out and I had to start over.

Firmness of reservoir – The reservoir material is very thin and velvety. Imagine rubbing a rose petal between your fingertips.  Since it is so lightweight it may not fully expand while it is in place. As mentioned before, it should not be detectable by you or your partner if used while having penetrative intercourse.

Size (only one has different sizes) – This disc is only available in one size.  According to the company, since menstrual discs sit differently than a menstrual cup, it can be used by anyone.  However, it has been reported to feel too large by some users.

Capacity – According to the company, the Ziggy Cup holds a maximum of 76 ml, which would be one of the highest capacities that a disc or cup is reported to hold.  However, many users feel that this is a false claim as the collection reservoir may not fully expand to hold that capacity while it’s inserted. 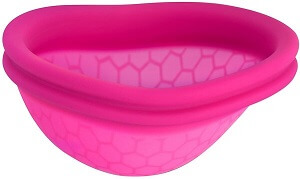 The Intimina site has a brief walkthrough on how to use the Ziggy Cup with basic illustrations.  You can also download the user manual from the site that includes an explanation of the design, how to clean it before the first use, how to fold, insert, and remove it.  There is also information about avoiding leaks, care & cleaning, storage, and warnings & recommendations.

Where to Buy the Ziggy Menstrual Disc

Nixit – In terms of softness, double rim, and material, the Nixit Menstrual Disc would be very close in design.  However, the rim of the Nixit is a circle instead of ergonomically shaped.  This disc is also softer. 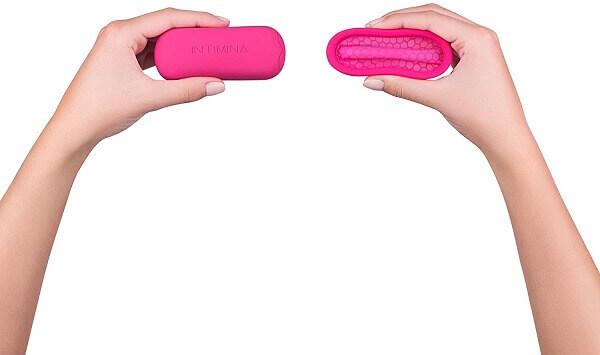 While the Ziggy Cup had some great design elements, just like every disc or cup, it’s not going to be right for everyone.  Some users are perfectly fine and capable of using a softer disc and have no issues while inserting it.

I, on the other hand, don’t like the fact that I have to make sure that this disc is facing a specific way before inserting it.  I also felt that the rim was just too soft to get it inserted without a few tries.  I can’t speak for how well the leak-proof double rim worked as I didn’t leak while using it, but it seemed to keep the disc from slipping.  On the other hand, I was definitely not pleased that it caused me irritation and uncomfortable removals.

How do you insert the Ziggy Cup?

Is the Ziggy Cup FDA registered?

Yes, the LELO company who sells the Intimina products based in the USA, as well as the China-based manufacturer for the Ziggy Cup is up to date with their FDA registration.

Can you pee and pool while wearing the Ziggy Cup?

You can use the toilet freely without removing the Ziggy Cup.  If you don’t feel comfortable doing so, you can also remove it before using the toilet and then re-insert it afterward.

Is the Ziggy Cup safe?

The Ziggy Cup is safe to use for up to 12 hours before it needs to be removed and washed.  You can re-insert the cup immediately after or store it away for your next period.