Five (More) Myths About Your Period

Half of the world’s population is biologically female. So why are women’s health issues still such a mystery?

Knowledge surrounding menstruation is especially murky, even among those of us who deal with it each and every month. On average, women will have somewhere around 450 periods throughout their lifetime. But myths, rumors, and misinformation still abound.

In our previous blog covering 10 common myths about your period, we debunked everything from the presumption that tampons or cups can take your virginity to the fear that you’re more likely to get attacked by bears or sharks while menstruating.

Now we’ll explore a few more “truths” that are more fiction than fact.

1. You Shouldn’t Take Baths on Your Period

Misconceptions that you shouldn’t take a bath while menstruating probably go back to days when public bathing or reusing bathwater was a more normal occurrence. Sharing water with blood, no matter the source, isn’t exactly hygienic.

But now that we do most of our bathing in the privacy of our own bathrooms, there’s no reason to avoid a nice, long soak while on your period.

In fact, a hot bath can help with the back pain and cramps many women experience when menstruating. Heat is commonly used to ease cramping, and adding Epsom salts to your bath also gives you extra magnesium. Magnesium can ease the uterine contractions that cause cramps in the first place.

But there are a few things to keep in mind when taking your bath. Some women mistakenly believe that a hot bath will stop their periods early. In fact, the pressure from the water while you are submerged can hold your menses. But being in warm water can also increase bleeding in some and result in a heavier flow shortly after a bath.

If you suffer from anemia, take this into consideration before filling up your tub, lighting some candles, and breaking out the bath bombs.

2. Having Sex on Your Period Is Unhealthy 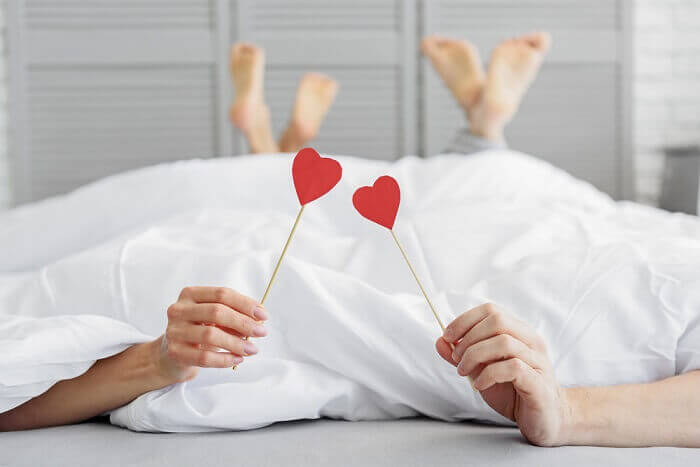 You can decide to have sex or avoid it altogether when on your period. Whatever you choose, base your decision on you and your partner’s preferences, not on widespread myths and taboos.

There are few, if any, medical reasons to avoid sex while menstruating. If you have certain STIs, you may be more likely to spread them to your partner via your menstrual blood during intercourse. Otherwise, it’s just as safe as any other sex you would have at other times of the month.

So where does the taboo for period sex come from?

It is purely tied to cultural and religious beliefs. Many ancient and not-so-ancient societies viewed women as “unclean” while menstruating. In some cases, men believed that menses could sap them of their sexual vigor or even kill them. Women were often isolated and kept separate from their community while on their periods.

Sadly, these ideals and forms of social isolation still occur today in some religious and cultural groups today.

But the truth is that intercourse during your period can actually provide unexpected health benefits. Orgasms release a number of endorphins into your system. These chemicals affect both your brain and your body in positive ways. They can reduce period cramps, improve your mood, and even lower your blood pressure. Orgasms also cause contractions in your uterus, which can shorten the length of your period.

Period sex is sometimes more pleasurable. Many women’s libido increases when they are menstruating. Your menses can provide natural lubricant for smoother intercourse, and your vagina and vulva may also be more sensitive. All of these factors can lead to a more intense experience in the bedroom.

3. You Can Get Your Period While Pregnant 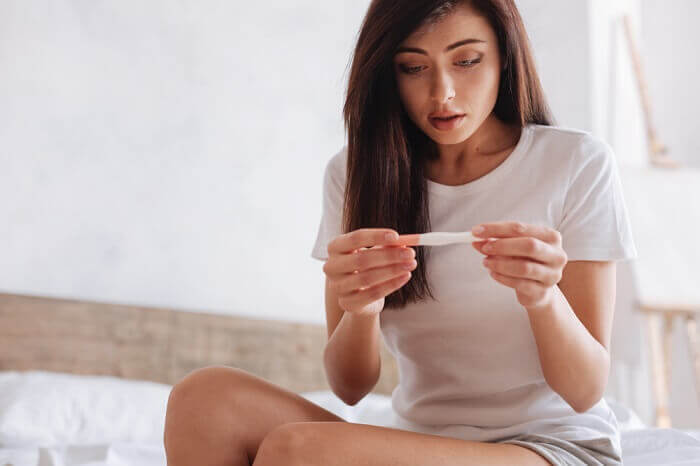 Technically, having a period while pregnant is impossible. But that doesn’t mean that you can’t have pregnancy symptoms that may mimic a period.

Your period occurs when your uterus sheds its lining – and any unfertilized eggs – to make way for a new menstrual cycle and viable egg. In a healthy pregnancy, your uterus will maintain a thickened lining for a fertilized embryo to attach to. Thus, no period will take place.

But if a fertilized egg does attach to the lining of your uterus, it can cause something called implantation bleeding. This may happen very shortly after you become pregnant. It causes light pinkish or brownish spotting that may mimic a period.

This differs from regular periods because the “spotting” is usually much lighter than what occurs during normal menstruation. Period bleeding tends to start out light, get heavier, and then lighten again. Experts say that if you bleed enough to fill a tampon or pad, you’re most likely experiencing a normal period, not implantation bleeding.

Implantation bleeding happens in the first month of pregnancy, shortly after your egg has been fertilized. Other types of bleeding, some serious, may occur later in a pregnancy. But they usually happen irregularly and do not follow your normal menstrual cycle.

But if you’re someone who already has irregular periods, whether due to issues with hormones, age, or other physical factors, it is much harder to differentiate between an unexpected pregnancy and an unpredictable menstrual cycle.

In any case, if you notice any large changes in your menstrual cycle or experience other pregnancy signs – such as tender breasts or nausea – it’s always a good idea to seek the input of a medical professional.

4. Women’s Cycles Will Sync Up 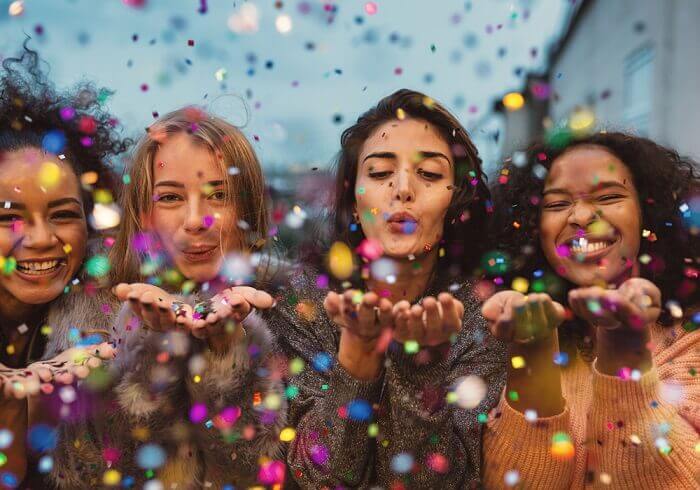 Surprisingly (to me, at least), women’s cycles don’t sync up.

It seems like every woman you know might have a story about a menstrual cycle that shifts to match other women close to them. Whether they’re college roommates, coworkers at a new job, or sisters living in the same household, it seems that we’ve all experienced synced periods at some point.

This idea all began with a 1971 article published in Science magazine by Dr. McClintock. She studied women who went to the same college and found that friends and roommates were more likely to have corresponding menstrual cycles.

The theory assumes that the pheromones that women release can affect each other’s cycles. This allows them to ovulate – and thus menstruate – at the same time. In an era when feminism was beginning to gain steam, this was a popular and widely circulated hypothesis. Afterall, if a community of women are all fertile at the same time, one man can’t reproduce with all of them. This allows women to have more control over their bodies and who they choose to have sex with.

While it’s an attractive theory, technology has put a damper on its credibility. Scientific data collected from period and fertility tracking apps show that there is no real evidence that supports the idea that women’s periods actually sync.

Most likely, factors like the differing lengths of menstrual cycles mean that women’s periods sometimes sync up by chance. And as humans tend to do, we then connect our own beliefs and assumptions to what is otherwise merely a coincidence.

Moon myths don’t just cover werewolves and increases in “lunacy”. They’ve also made their way into our ideas about our menstrual cycles.

Lunar cycles and our menstrual cycles have ancient roots. Afterall, the words “menses” and “menstruation” come from the Latin and Greek words “mene” (moon) and “mensis” (month).

Some holistic health professionals still claim that your cycles should correspond with the cycles of the moon. You may find “professionals” who claim that a menstrual cycle that doesn’t align with moon phases means there is some sort of imbalance (whether spiritual or physical) in your body.

This idea usually hinges on the assumption that, since the moon affects the tides, it will also alter the fluids in your body. Also, many animals’ life – and reproductive – cycles are heavily dependent on the moon. So shouldn’t ours be as well?

But, again, modern period tracking apps have debunked this hypothesis.

The app Clue has analyzed data from over 7.5 million users and found no correlations between menstrual cycles and the cycles of the moon. They theorize that this myth comes from the fact that the average menstrual cycle is almost the same length as the lunar cycle.

As a result, some women’s cycles do line up with the changing of the moon, but this is usually the exception, not the norm.

Five More Lesser-Known Myths from Around the World 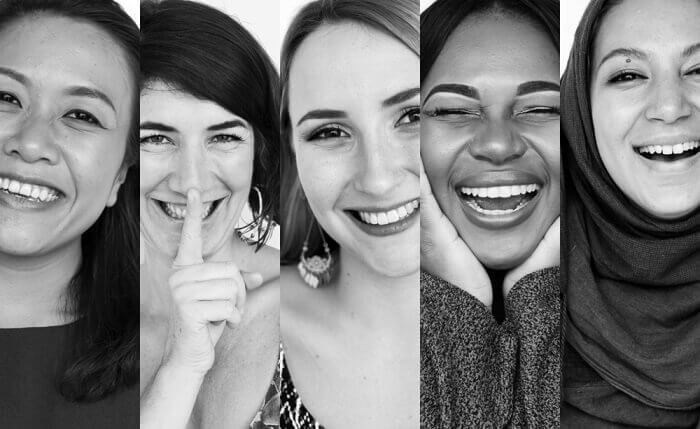 Most of the myths we’ve covered in this and our previous blog are based on misconceptions found predominantly in Western societies. Here are five more that you may not have heard of:

Are Warm Baths Good for Periods?

For most people, the answer is yes! The heat from the water can sooth cramps, reduce lower back pain, and help alleviate the stress that sometimes accompanies our periods. Add in a bit of Epsom salt, and you’re even more likely to reduce the pain from cramps. But if you know that you are anemic, it might be a good idea to steer clear of hot baths and showers on you period; they can actually make your flow briefly heavier.

Why Is Menstruation Considered Impure?

There are as many answers to this question as there are cultural, religious, and social beliefs surrounding women and their bodies. Some cultures view menstrual blood as sacred. But others see it as a threat to male vigor and the cleanliness of a household.

My guess? The ideals of ancient societies have become modern taboos. Earlier cultures didn’t understand or recognize that our periods are an important part of bringing new life into the world. Instead, they saw menstruation as an unfathomable event that only occurred among women. This unknown mystery turned into fear, and that fear turned into a revulsion that is still felt by some today.

Medically speaking, no. You can actually benefit from period sex by obtaining cramp relief, achieving an elevated mood, shortening your period, and having more pleasurable orgasms. Just make sure to take the same precautions you would while having sex at any other time of the month! You can still get pregnant or pass on STIs when having sex on your period.

Can you get a period and still be pregnant?

No, but you can get something called implantation bleeding at the very beginning of a pregnancy. It consists of pinkish or brownish spotting. If you experience unusual or inconsistent vaginal bleeding, breast tenderness, or recurring nausea after being sexually active, it’s a good idea to seek the advice of a physician.

Not really. Many women and experts who are into metaphysical and alternative science will argue that the phases of the moon correspond to different parts of your menstrual cycle. But science and statistics say otherwise. Some women’s menstrual cycles are the same length of lunar cycles; others’ cycles are not.

Stefanie Willis
Stefanie Willis is a published writer and educator who specializes in crafting content that is creative, compelling, and informative.

Stefanie has been writing professionally for over a decade. She has worked with businesses selling everything from lingerie to medical software. She has also created educational materials for international schools, community colleges, and even the United States Department of Veterans Affairs.

Though born and raised in the US, Stefanie now lives in Da Nang, Vietnam. She enjoys finding new outfits to dress her dog in, running on the beach, and working on her first novel.